Tamil Nadu is likely to do better in the upcoming tiger census and the population of big cats are intact in two tiger reserves of Tamil Nadu, State Forest Minister Dindigul C Sreenivasan told reporters on Saturday, adding that were possibilities for the population of tigers in TN to increase from the current strength of 229. 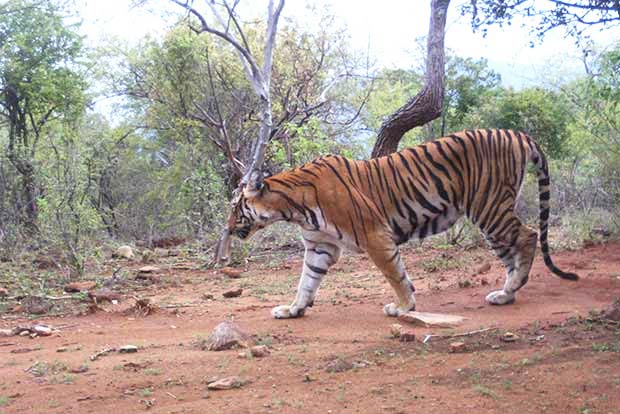 A tiger at the Sathyamangalam reserve

Of the four, two tigers reserve Mudumalai and Sathyamangalam were doing well and the field reports are encouraging. The security in all the four tiger reserves in TN has been enhanced for better wildlife management. Work on the long-pending demand to establish a mini-zoo in Tiruchy is progressing as per schedule, he said.

According to Forest Department insiders, the wildlife officials have written to the Central Zoo Authority seeking permission to receive wild animals from Arignar Anna Zoological Park in Vandalur, Deer Park in Ooty and zoos located in Karnataka and Kerala.

According to A Kumaraguru, wildlife conservationist and board member of Sathyamangalam Tiger Conservation Authority, the rise in TN’s tiger population was good, but there is a need for more alerts and awareness among the people.

“Sathyamangalam tiger reserve falls in the revenue districts of Erode and there is a need for a landscape-based census. At present, the census is carried out in forest ranges that comprise only the forest boundaries but there are other areas, where big cats do move and migrate, this needs to be monitored,” he said.

Furthermore, the interstate coordination during census should be more effective so that there is zero error without any duplications due to migrating tigers, he said.

As far as TN, the effective protection for tiger and its co-predators had helped to boost the population, but there are issues like interstate sandalwood smuggling, Ganja cultivation and poaching. In Sathyamangalam the number of wildlife crime cases had been drastically reduced through 25 anti-poaching camps and there is a need for scientific conservation of tiger habitats, he said. The prey-predator density in Sathyamangalam and Mudumalai are encouraging with a good population of spotted deer, Sambhar and Gaur, but the deterioration of forests is an issue, he said.

“The overall idea of the National Tiger Conservation Authority of India is to double the number of wild tigers by 2022, but the tiger deaths in central India and South India is an issue,” said a source attached to Traffic India, an organisation that monitors the illegal wildlife trade in India.

For the fiscal 2017- 2018, Madhya Pradesh tops the list with tiger deaths, followed by Maharashtra, Karnataka and Tamil Nadu. In the past six years, more than 50 tigers have died in TN with sixty per cent of them coming under natural death and another 40 per cent is unnatural. TN like other states continues to report poaching, the source opined.

TN witnessed 49 deaths in 6 years  Tamil Nadu has four reserves and 229 tigers, with Mudumalai accounting for the maximum number of big cats followed by Sathyamangalam. Sathyamangalam, which shares border with tiger reserves located in Karnataka, is proving to be a good habitat for wild cats due to its sprawling space. In the past six years, TN has recorded 49 cases of tiger deaths, including 22 attributed to natural deaths. Four deaths were due to accidents, while ten cases of poaching were recorded. Four new tiger death cases are still under investigation.