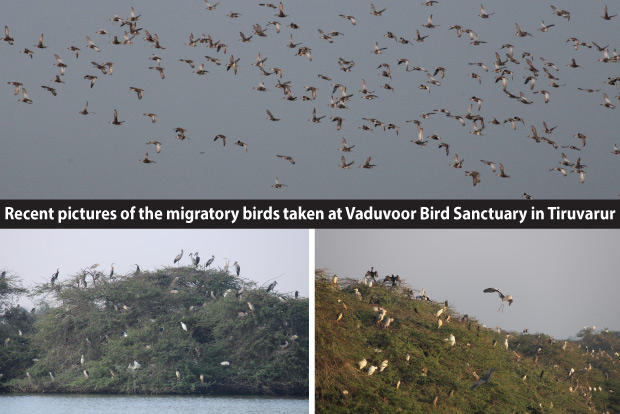 Ornithologists and bird watchers monitoring the bird migration this year have seen a change of migration pattern this season. Painted stork and spoonbill are missing this year in delta region and flamingos are also evading from the Pulicat region coming under Tamil Nadu border. However, the winged wader is omnipresent in Pulicat area of Andhra Pradesh while thousands of flamingos have descended along the backwaters of Rameswaram islands.

“Usually pelican, spoonbill, flamingos and ruff would throng the backwaters and the birds’ sanctuaries in delta region spread over Thanjavur, Tiruvarur and Nagapattinam and Point Calimer, but since 2018 'Gaja', the migration pattern of the birds visiting central districts has changed a lot,” said conservation scientist A Kumaraguru who documents the bird migration data for the Thanjavur forest circle. “Similarly, there is a dip in the sighting of Indian rollers and golden oriole in the central region. We are documenting these data as part of the annual census, but there is a need for long term study on these changes,” he said. “For Tamil Nadu, the bird migration starts by November and the season ends by March. We have to wait and watch for the final trends,” Kumaraguru added.

However, according to Forest Department insiders, there is a no major change with predatory and the migratory duck varieties, this season. Predatory birds like harrier, eagle, vulture, kite and falcons are recorded and their presence is encouraging in Coimbatore, Sathyamangalam and Kancheepuram areas.

“Bird-watchers visiting Rameswaram are also delighted with a large flock of flamingos, this season and it’s a visual delight for residents,” said Mohammad Tharik, a budding bird watcher based in Rameswaram.

“To support the census documentation, photographs of flocks, nests and chicks are recorded, and the ongoing census will continue till the end of February. There is also two-day synchronised census by the State planned by the end of this month. Besides, seasoned ornithologists are also participating in the annual Asian waterbird census and e-bird bird count survey taken up in many parts of the State,” a senior forest ranger said. Movement of small mammals and reptiles like the jackal, python, monitor lizard, porcupine, otter, palm civet and wild boar are also documented, the ranger said adding that all database are incorporated into the local district forest office database.

See All
Invitation for National e-Conference - 2022

HI! Hope this mail finds you in good spirits BCF INDIA cordially invites you to our National e-Conference on organised in collaboration with Department of Zoology, Thanthai Periyar Government Arts and

Not forest, but tree cover census: Experts on FSI survey