Bird watchers have noticed that large migratory birds have left the Delta region ahead of cyclones Nivar and Burevi. The Forest Department recorded similar behaviour in birds during Cyclone Gaja. 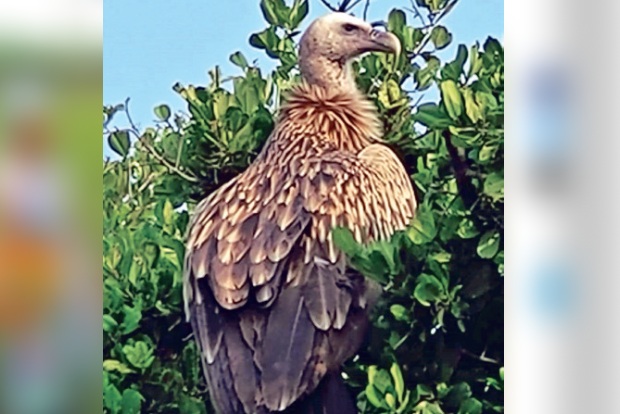 The Himalayan vulture roosting at Point Calimere in Nagapattinam

Though the volumes of birds have reduced the foresters and conservationists are elated over the sighting of Himalayan vulture after a period of 12 years at Point Calimere in Nagapattinam.

Thanjavur circle conservator of forests S Ramasubramanian had asked the field biologists to document the range and feeding habitat pattern of the visiting vulture which is the second-largest vulture in the world after the griffon vulture endemic to rain shadow region of Himalayas said a local forest official source.

“The Himalayan vulture mostly lives in the Himalayas on the Tibetan plateau (India, Nepal and Bhutan, central China and Mongolia) and is also found in the Central Asian mountains (from Kazakhstan and Afghanistan. There are previous recordings in Tamil Nadu dating back to 2008,” said conservationist scientist A Kumaraguru of Biodiversity Conservation (BCF) Foundation Tiruchy, who is now documenting the synchronised bird census details for state Forest Department.

The Himalayan vulture occasionally migrates to northern India, but migration is usually altitudinal. Breeding is typically at elevations of 600 to 4,500 metres and the bird is closely monitored on regular intervals. The Himalayan vultures also frequent Sathyamangalam Tiger reserve and the sighting of this critically endangered bird is rare than sighting tigers.

Bird watchers of BCF had also documented the return of large migratory birds and there is a resemblance in bird behaviours during Cyclone Gaja and Nivar, Kumaraguru said.

“The foresters are also hoping for the bird migration to be normal from mid-December as there is no immediate threat of cyclone. With the rains receding in Delta region Bar-headed goose and Pelicans have now started revisiting the bird sanctuaries in Delta, including Point Calimere and Muthupet Lagoon,” said another Forest Department official.

Non-breeding migrants throng the wetlands in central Tamil Nadu due to the low public disturbance and footfall to bird sanctuaries is likely to improve during Christmas holidays, the official added.